The Jefferson Memorial was dedicated in 1943. Over the next 68 years settlement and lateral movement caused the seawall at the Jefferson Memorial to pull away from the primary plaza. Clark Construction Group, LLC was chosen to perform the repairs to the seawall with Raito, Inc. performing the drilling. Caisson installation began in June of 2011. Raito asked KB International to design a system that would support the difficult drilling conditions. The soil profile from the bottom of the jointed casings to the top of rock consisted of sand and silt with very low SPT blow count values. KB’s Enhanced SlurryPro CDP system was used to stabilize the soil. In addition InstaFreeze was added to control the zones of flowing sands. SlurryPro MPA was used for additional fines control. No pH adjustment was required even though water from the adjacent tidal basin was utilized for slurry make-up. On many of the piles, KB’s polymer was used to stabilize the open holes for much longer than expected (up to 72 hours) due to scheduling restrictions at the national park. Of greatest note was that on Tuesday, August 23, 2011 at 1:51 in the afternoon, the East coast experienced a 5.8 magnitude earthquake centered in the Piedmont region of Virginia approximately 83 miles from Washington DC. At the time of the earthquake, one of the piles was being held open prior to cage placement. Upon testing after the earthquake it was determined that only one inch in depth had been lost. The final design consisted of 39 caissons with a diameter of 48 inches installed up to 120 feet. The polymer system was able to stabilize the walls with minimal fluid loss even in zero blow count material and concrete utilization was within theoretical values. 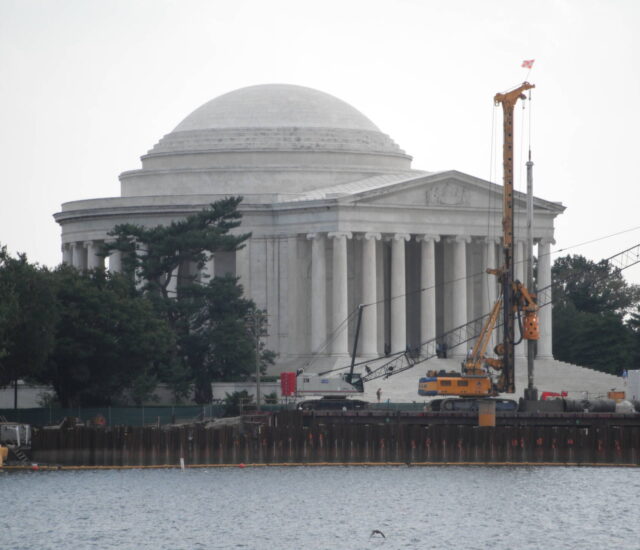